You are here: Home / 4. Destinations / 4.1. Moscow / Moscow in Space: from the Museum of Cosmonautics to the Planetarium

The history of Russia and its capital, Moscow, is very closely related to space exploration. In this post I will show you a tour along the different museums, monuments, hotels and streets of Moscow dedicated to the space age and its heroes, the cosmonauts.

If you love astronomy, Moscow has a rich astronomy heritage. You can find museums, monuments, streets and hotels dedicated to the space age in several parts of the city. In this post I have prepared a Cosmonautic Route through Moscow guide, in which you will discover the fascinating history of the Russian space age.

Before beginning this guide, it should be noted that in Russia, the Cosmonautics Day is celebrated on April 12th, which is a special day established in 1962 to commemorate the first manned space trip, as it took place on April 12th, 1961 by the Soviet cosmonaut Yuri Gagarin, on board the Vostok 1 spacecraft that orbited the Earth for the first time. It is a day of celebrations related to cosmonautics in Russia, but it is a working day. The entrance to the Cosmonautics Museum is usually free this day.

In this map you can see where all the museums, monuments, streets and hotels mentioned in this Cosmonautic Route are located:

This route begins at Cosmos Hotel, where you can stay for a total immersion experience, especially because it is located northeast of Moscow, in one of the main city avenues, Prospect Mira, and near the Monument to the Conquerors of Space and the Museum of Cosmonautics. In summer, the sun is reflected so well on this hotel facade, that you will think you have it right in front of you. 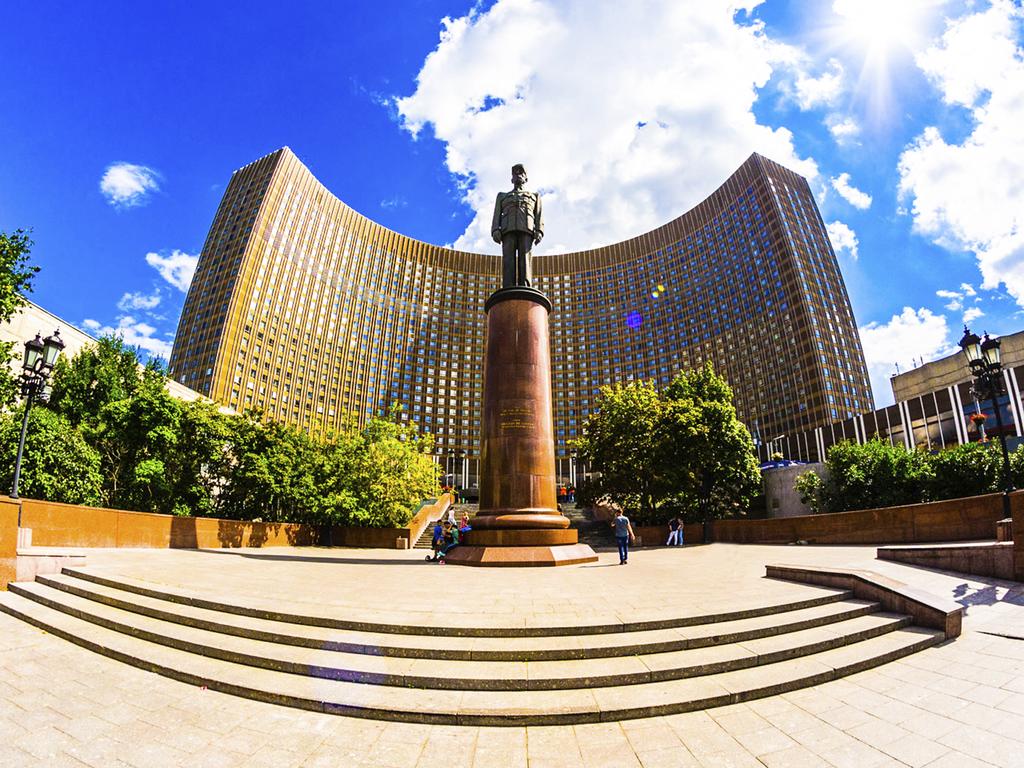 With 1,777 rooms, it is one of the largest in Russia. It was built to serve the XXII Summer Olympic Games, held in Moscow in 1980, given the lack of hotel rooms that the city had. It was inaugurated on July 18th, 1979. In 1990, the square where the hotel is located was renamed in honor of General Charles de Gaulle, and on May 9th, 2005, for the celebration of the 60th anniversary of Russian Victory Day, a monument dedicated to De Gaulle was inaugurated, with the presence of the then French president, Jacques Chirac.

It is also close to the All-Russia Exhibition Centre (VDNKh), the Ostankino Tower, the Olympic Stadium (Olimpiysky) and the Sokolniki Exhibition Complex. 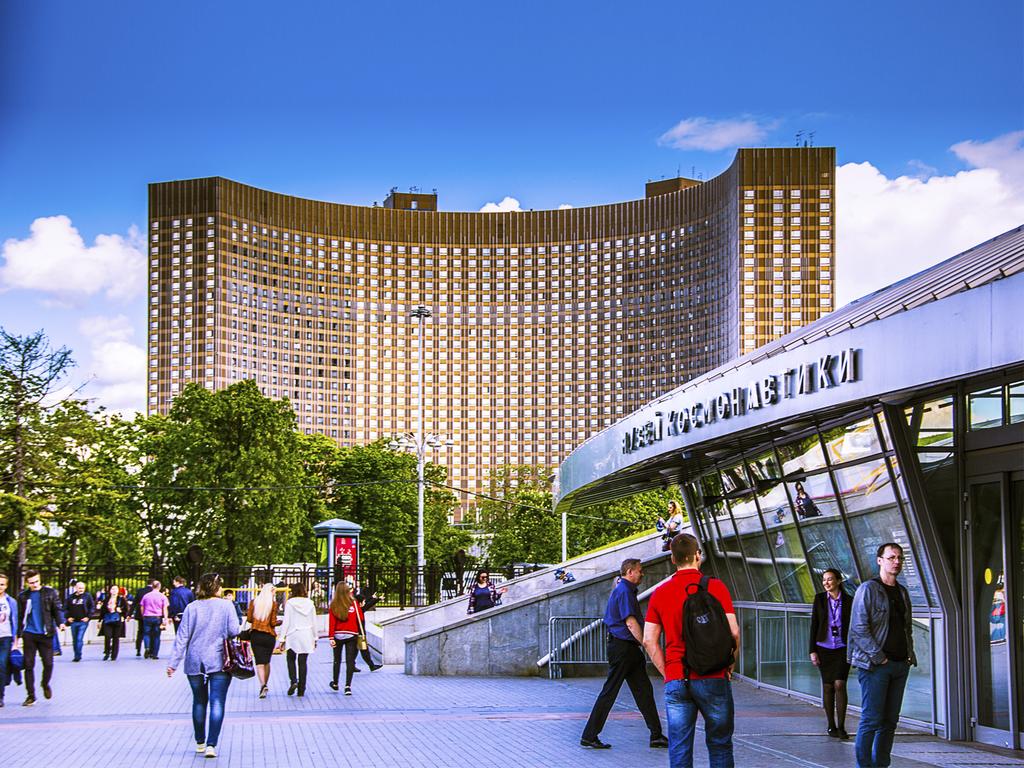 It is not a centric hotel, but its more economic price and its proximity to the exhibition center and the VDNKh metro station (you can get to the center of Moscow in 15 minutes), make this hotel very used by travelers from all over the world. It has a spa with swimming pool, fitness center and massage service. The views from the highest floors of this hotel are very good: 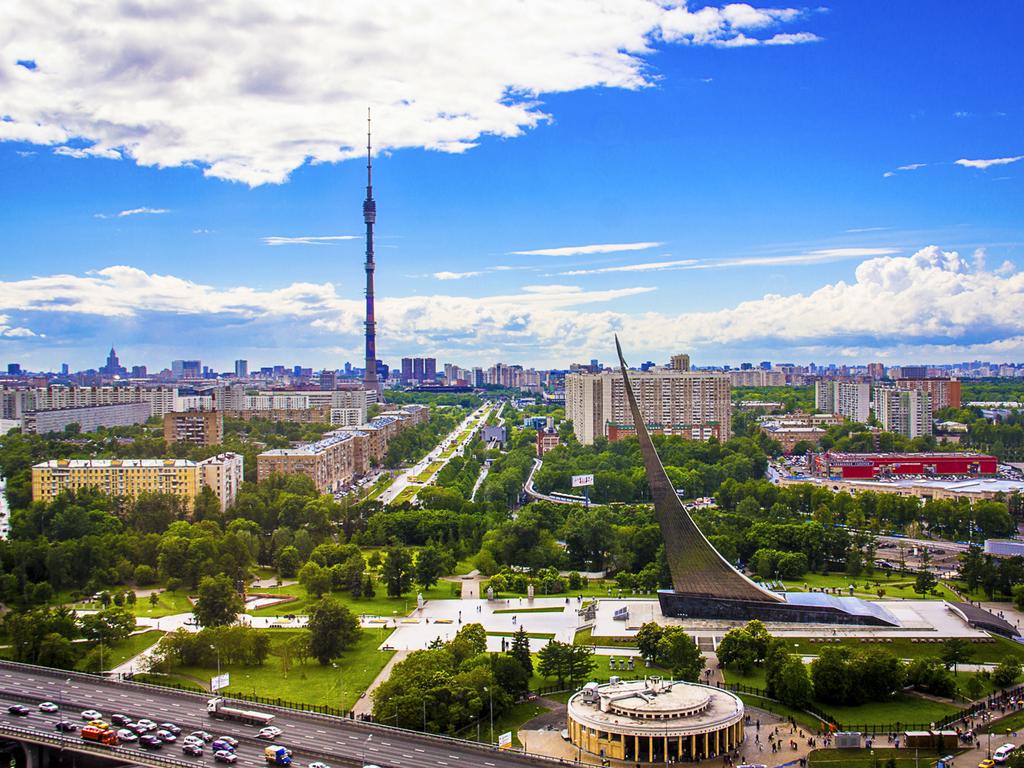 However, some of its facilities have become a bit outdated and require some renovations. In fact, this is one of the most common criticisms among travelers who have used this hotel’s facilities.

2. Monument to the Conquerors of Space

Next to the Cosmos Hotel, you can find the Monument to the Conquerors of Space, which was developed together with the project of Cosmos Hotel building by a team of Soviet and French architects.

The Monument to the Conquerors of Space was erected to celebrate the conquests of Soviet people during the era of space exploration. Thus, in March 1958, a few months after the launch of the space satellite Sputnik 1 (the first artificial satellite in history), a contest was held for its design to which more than 350 proposals were submitted, with the winning proposal being the one directed by Soviet sculptor, Andrey Faidysh.

The construction took several years until its inauguration on October 4, 1964, on the seventh anniversary of the launch of Sputnik 1.

The monument is a giant obelisk, with a space rocket at the top, so that the obelisk comes to represent the column of smoke left by the spacecraft. It is 107 meters high, weighs 250 tons and is covered with titanium, a material used in the constructions of space rockets. 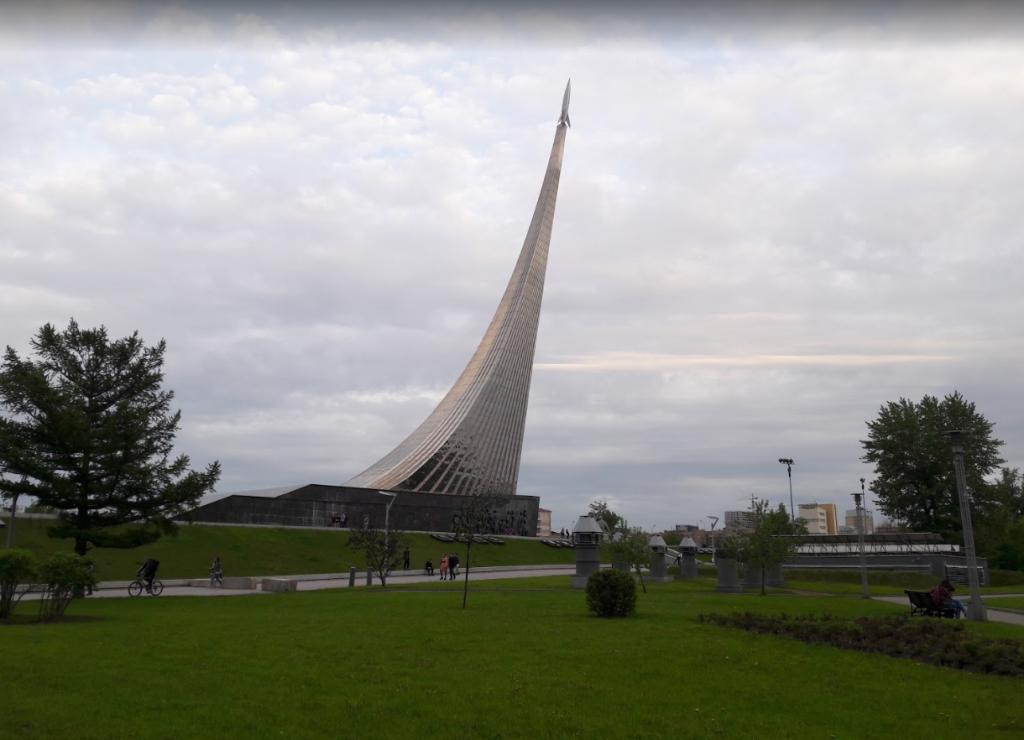 At the base of the monument there are two inscriptions: 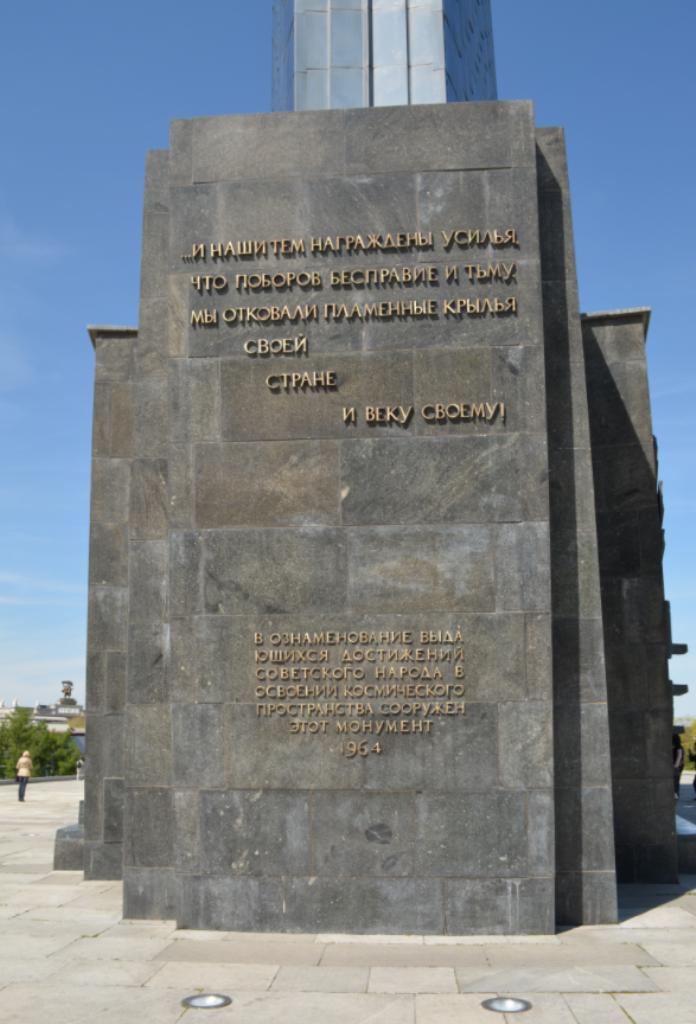 A poem in Russian:

And thus rewarded are our toils,

That having vanquished lawlessness and dark,
We have forged great flaming wings

For our
Nation
And this age of ours!

A dedication reads under the poem:

This monument was constructed to celebrate the outstanding achievements of the Soviet people in space exploration, 1964.

At the base of the monument, on the sides, there are two reliefs with men and women dedicated to the space program (engineers, cosmonauts, scientists, workers, etc.), carrying out their activities related to their profession, with an omnipresent Lenin behind them. 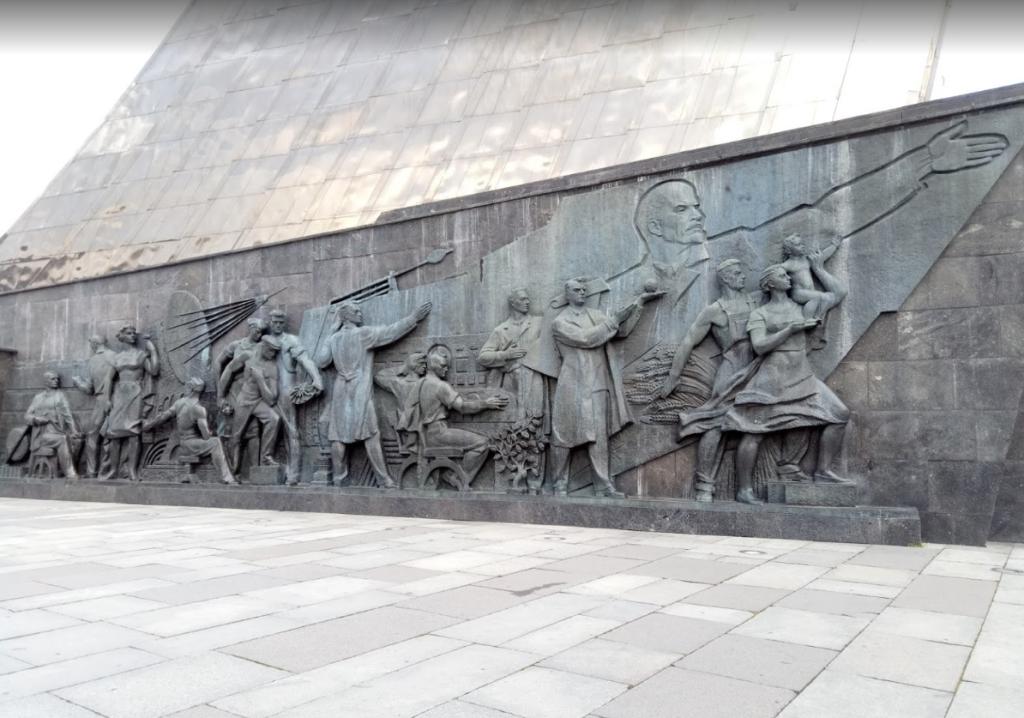 At the base of the Monument to the Conquerors of Space you can find the Museum of Cosmonautics. The initial project of the monument oversaw the construction of a museum in its base, however, the museum would not be finished until 1981.

On April 12, 2009, Day of the Cosmonautics, the museum was reopened after a rehabilitation that lasted 3 years. Currently, the museum no longer focuses exclusively on the achievements of the Soviet space program, but after the rehabilitation of the museum, sections were added dedicated to the space programs of the United States, Europe, China and the International Space Station.

The museum offers original interactive exhibits, with the training systems used by cosmonauts, and it’s one of the museums with the greatest tourist attraction in the city. 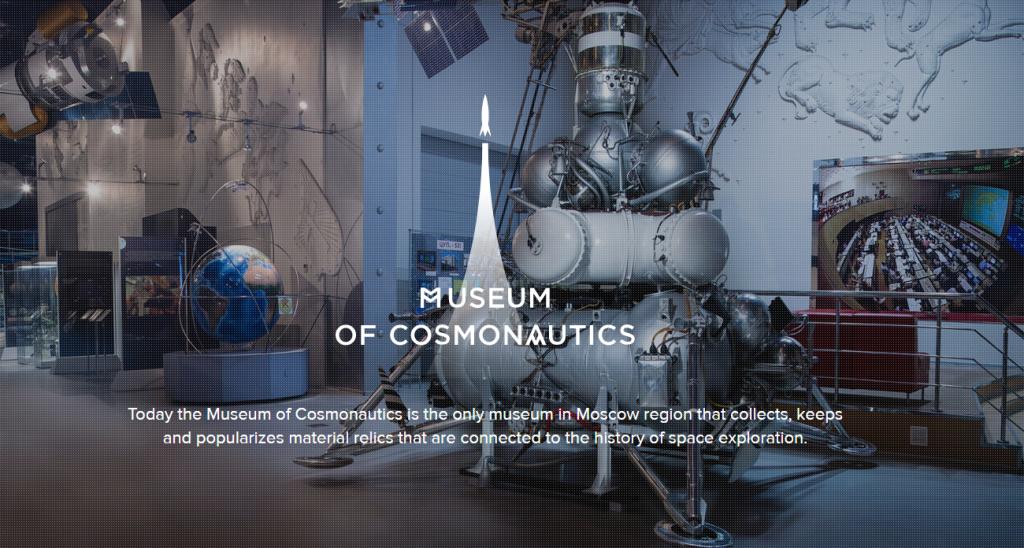 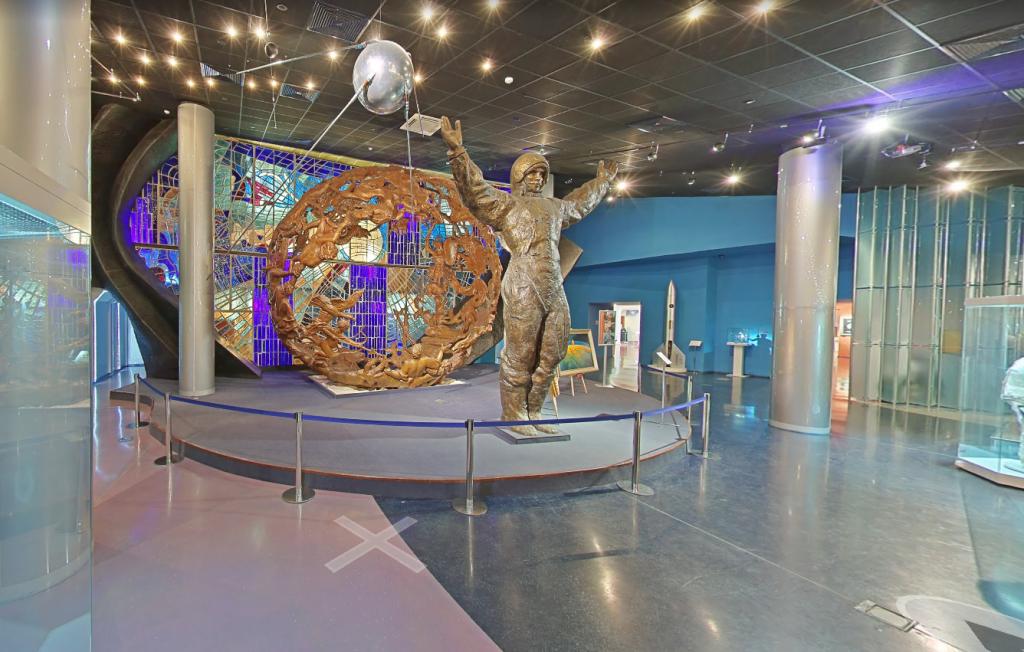 The Museum of Cosmonautics is connected to the VDNKh metro station, through a pedestrian avenue called the Cosmonauts Alley, along which you can see the busts of the most important Soviet cosmonauts in history: 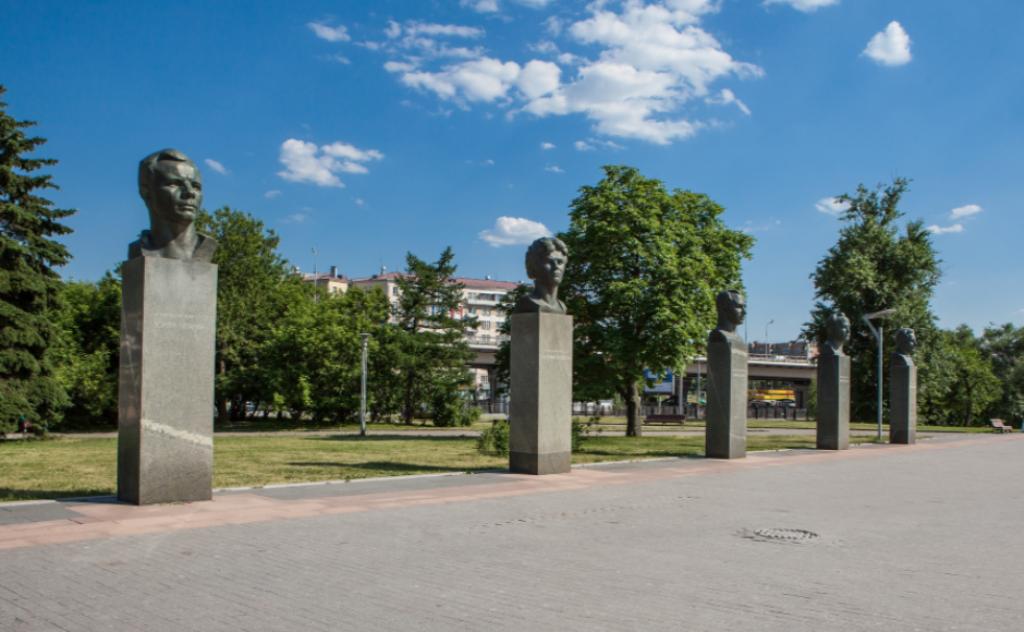 In 2008, it was also erected, on this pedestrian avenue, the monument to Sergei Korolev, famous Soviet engineer and rocket designer during the space race. He seems immersed in his thoughts with his eyes focused on the composition of the Bronze Solar System, right in front of him. 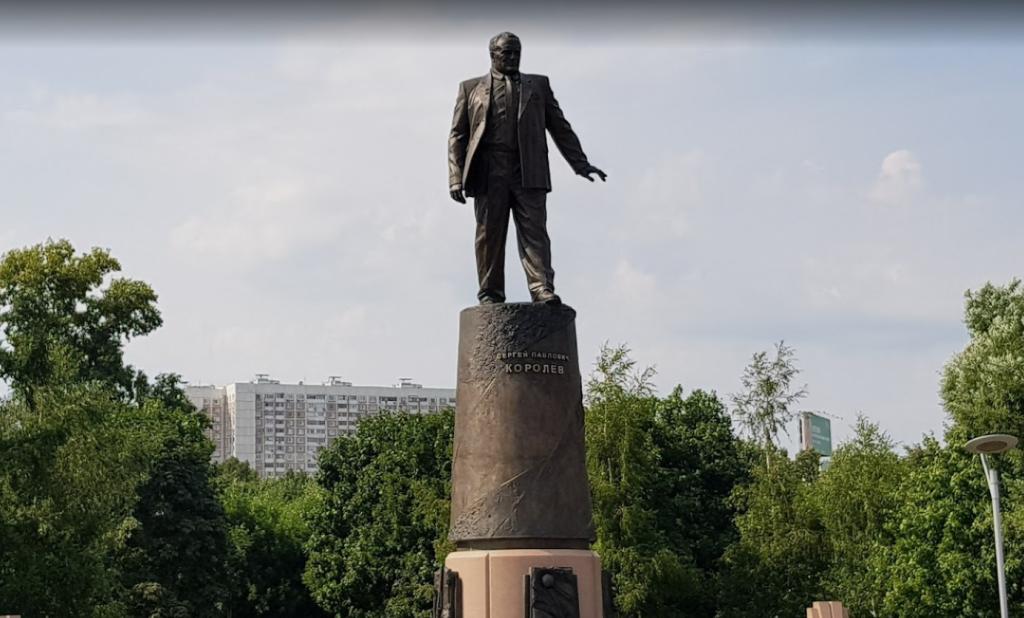 At the end of this alley, at the base of the Monument of the Conquerors of Space, we can find the statue of the one who is considered the “Father of Cosmonautics”, Konstantin Tsiolkovsky, looking back on the road. 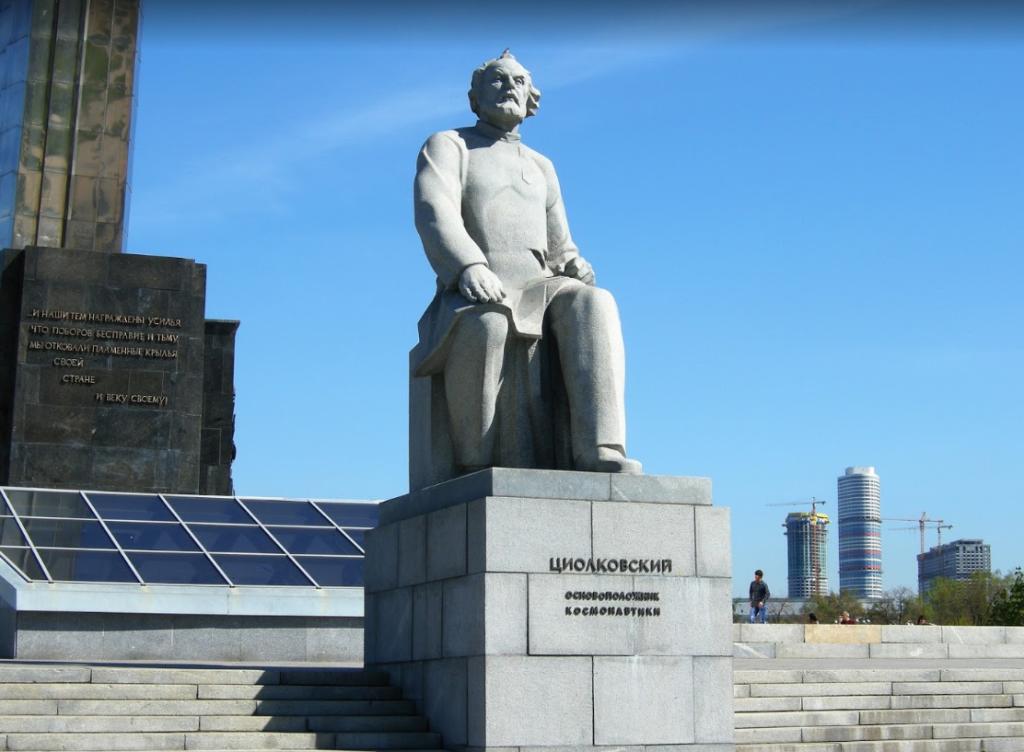 So far, the Cosmonaut Route can be made on foot and in less than a day. If you are going to spend a few days in Moscow, it is highly recommended to do this route, since it is one of the most interesting itineraries in Moscow. From this point, to continue this route, you will have to travel by either public transport or by taxi.

In the Cosmonauts Alley you can find the bust of Yuri Gagarin, but it is even more interesting to visit the monument dedicated to Yuri Gagarin, in the southwest part of the city, in the square that bears his name. The problem is that it is far from the center.

In the 1960s Gagarin became the most famous person in the USSR, with no political vocation, which is why his popularity reached the whole world, being the first man to reach space.

The monument was opened in 1980, 12 years after his death, and was located in a place away from the historic center of Moscow, too far away, I would say, considering the historical importance of Yuri Gagarin. 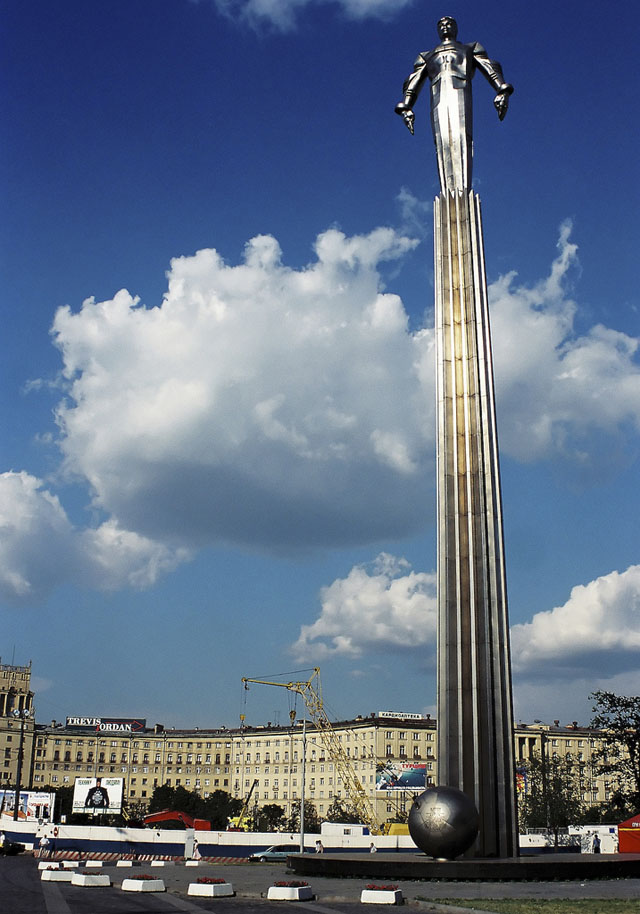 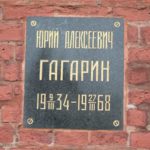 The monument consists of an obelisk more than 40 meters high, made of titanium, with a futuristic appearance, in which Gagarin appears at the top, almost characterized as a superhero, ready to continue furrowing through space.

The remains of Yuri Gagarin, however, rest in a central place in the city. Specifically, in the Necropolis of the Kremlin Wall, through which you can walk till the Lenin Mausoleum. In this same Necropolis there are also buried other famous characters in history, such as Stalin, Chernenko, Brezhnev or Yuri Andropov.

6. Museum of Aviation and Cosmonautics

Not so touristy and more focused on local population, there is the Museum of Aviation and Cosmonautics, located at the northwest of the city. In this museum you will find more than 1,200 objects, including a collection of space and aviation vehicles, engines, weapons, as well as a video room and a large library of science and technology. In the museum there is also a large collection of historical photographs (around 31,000). It is very frequented by school and student trips.

Finally, the Moscow Planetarium will allow you to discover the wonderful world of stars, the most important scientific achievements and the history of astronomy and space exploration. It was inaugurated in 1929. It is located to the west of the city, next to the Moscow Zoo.

You can perform scientific experiments in the Lunarium Interactive Museum, see the oldest astronomical devices in the Urania Museum and even touch real meteorites. It also has a 4D cinema and the Large Star Hall with a giant screen, to see the stars and the universe. It is a good visit to do as a family, but keep in mind that it will take you most of the day. 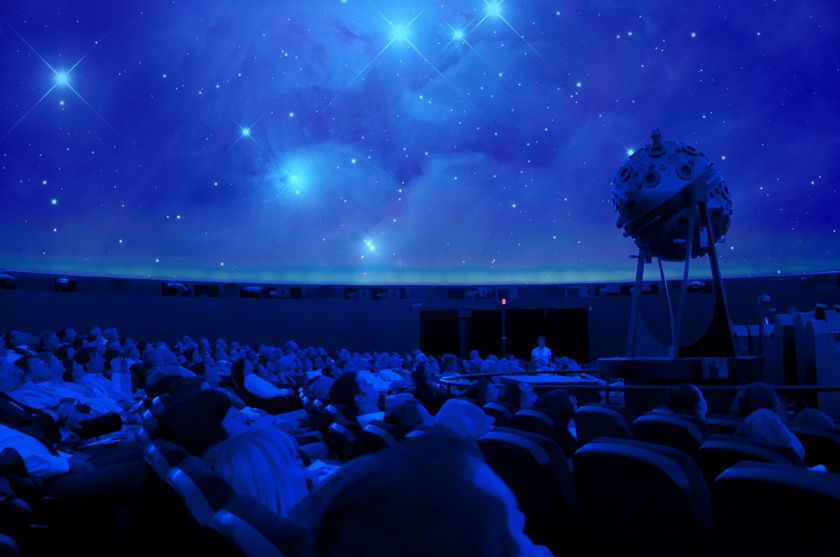 8. Guided tours of the space age

If you are someone who prefers to discover the space age through a private guide, from the GetYourGuide platform, there various guided tours available on this subject. Choose the one that best suits your tastes (and your budget):

Powered by GetYourGuide. Become a partner.

I hope I have made you curious about the fascinating history of Moscow during the space age. Have you visited any of these museums or monuments dedicated to the space age?

More than 400 pages with all the information you need to plan your trip to Russia online easily, cheaply and avoiding queues
END_OF_DOCUMENT_TOKEN_TO_BE_REPLACED